November is insect month here.  It’s been such fun.  I bought a set of Safari Ltd Toob Insects (spiders, centipedes and scorpions are not insects so I removed them from the Toob)  They’re also available at Michael’s and you can usually find a 40% off coupon to Michael’s online.  Then I made up cards to match the figures to. See them here: Insects Cards

Then I put the Toob insects in a bin with leaves from the Dollar Store.  The children enjoyed hunting through the leaves for insects and matching them to the cards.

We also used the cards to make little books, the 3 year olds love little books.  My daughter takes them to bed with her, lol.

I also went to the pet store and purchased a small plastic terrarium, it only cost $6 and I got them to put crickets in it.  The lady at the pet store also threw in some cricket food and egg cartons pieces.  We put an elastic over the top so that the kids couldn’t take the lid off accidentally (or if they dropped it, I could just picture crickets everywhere!!).  They were very careful though and it was great to observe real insects and hear them chirp.  However they die very quickly.  After the first night 2 were dead.  About half died off within a week and but the rest seem to be doing well.  I just leave the dead ones in there.  I also put some pieces of potato in. The terrarium we’ll be using again and again I’m sure. 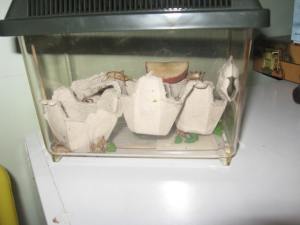 The materials that I enjoy the most are the real insect in resin.  I purchased a set from Affordable Montessori, a small set from Mastermind toys and another set from a Facebook buy and sell page.  These are great and will be used for years to come. 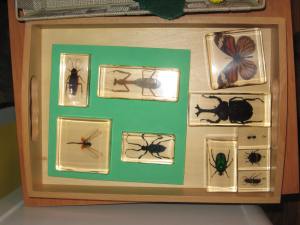 We’ve also come across a few ladybugs on our walks and took time to observe them.

For a craft we painted rocks like ladybugs.  Pumpkin 2 took a real liking to them and some had to be repainted because he climbed up to the counter and got them when they were wet!  He’s into everything nowadays.  He also really likes the ladybugs in the Toob, but they are choking hazards so I watch him with them. 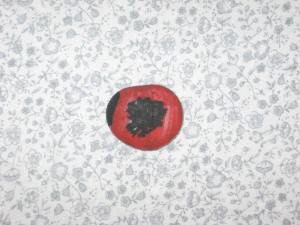