I wanted to share with you the toy that has consistently been a favourite in our house.  I’ve been doing daycare for over a year now and Magna Tiles have always been the most played with toy with all ages.  They get pull out pretty much every day.

Building toys are great open ended toys.  They are listed as for ages 3 and up but I’ve found younger children like them too.  They’re perfectly safe to have around babies as unless they were stomped on in heavy shoes, then only, maybe, would the magnets come out.  Pumpkin 1 loves playing with them, though she does get frustrated as her “castle” can collapse easily.  If I put the two corner pieces on, she can build the rest.  She loves playing with them in spite of her frustration.  And her fine motor skills are developing as she builds with them.  They can build houses, castles, cars, or just do designs.  They can also try to copy a picture or a structure you made to develop their spatial reasoning.  Here are some more of the structures Pumpkin 1 and a 2 1/2 year old daycare child built by themselves.

Showing you the door 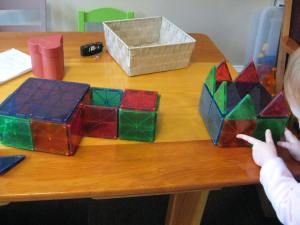 These are durable and washable which is always a plus in my books.  The clear ones can be used on a light panel also.  I had only a small set for the last year but I recently bought another one as there wasn’t enough pieces for multiple children to play.  I wish now that I had bought the large set.  Even the older children, age 10, like playing with them.  I like building with them too.  They’re a little expensive but they’ll last probably until your grandchildren and for the hours and hours of play we’ve gotten out of them already, they’re totally worth it.

I’m more and more amazed at the structures Pumpkin 1 is building with the Magna Tiles.  She’s 28 months.  This is what she built today all on her own.